We are making traction in Milton towards our goal of 7 individuals or families in Milton by 2016. We now have a second client in the program and in the coming weeks a third. Congratulations team for all your dedication, team work, passion and resilience. Milton Transitional Housing is making a difference to those at risk of homelessness in our community.
Posted by John Gregory at 3:05 PM No comments:

I am proud to share that Milton Transitional Housing received around 70 applications for the part time role of Administrative Support. What this tells us may be two fold, either that the cost of living and unemployment is driving more people to apply for positions or that we have ignited a passion within the community of Milton to see what we have not seen and to join forces and take action. I hope it is the latter.
Posted by John Gregory at 2:59 PM No comments:

On a previous post I highlighted that Garth Brown, landlord and affordable housing advocate was coming to Southside church in Milton. Twenty five residents of Milton came to listen to his experience at the Milton Transitional Housing event, including some new faces. His enlightening presentation highlighted some current Metroland: Living in Poverty series and the estimated 5,490 households in Milton who are classified as low income. Garth draw attention to the fact that individuals are turned away from the Lighthouse in Oakville or Halton Womens Place because of lack of limited capacity. He complimented MTH on the three housing units that they have secured and their five year vision. Garth was able to share some innovative affordable housing solutions with the audience, highlighting that there are both formal and informal alternative options available to us to support those at risk of homelessness. These include having those on low income rent converted basements. It appears this may be affected by a proposed change to zoning by-laws by the Town of Milton. We will investigate further to understand the implication of this. Thank you Garth for sharing your time and passion with us.
Posted by John Gregory at 11:34 AM No comments:

Habitat for Humanity in Halton 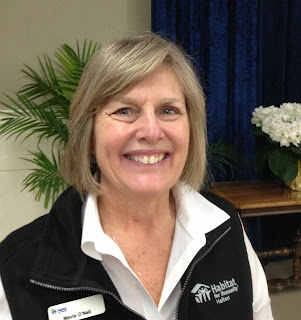 Habitat Halton was founded in 1999 by a group of individuals from Port Nelson United Church. Our first chairman was Peter Fisher, a long time resident of Burlington. Initially, we served only Burlington, however in July 2002; we became Habitat for Humanity Halton. We were granted charitable status in March 2000. To date, we have built and sold seventeen homes to hard-working, local families with mortgages structured so they can afford them. Five homes are in Burlington, three condos in Burlington, two are in Acton, four are in Georgetown, two homes in Oakville, and one in Milton. In the spring of 2011, the HomeWORKS program was launched. HomeWORKS is a series of free financial sessions. These session/workshops help people build on the skills needed to handle everyday $$$ challenges. This program offers tools to build and manage a budget along with money saving tips.

I understand that they aim to build another 24-28 homes in Halton in the coming years. I asked Mavis how Habitat for Humanity integrates with the goals of Milton Transitional Housing and Halton Poverty Roundtable. She strongly believes that each group has a slightly different and complementary objectives and that the collaboration and work of the multiple groups can only contribute to the increasing awareness of the challenge for those at risk of homelessness and poverty in Halton. Similar to MTH it began with a small group of passionate individuals who recognised that they needed to take action.
Posted by John Gregory at 2:07 PM No comments:

In the second of the Metroland Poverty series, Oakville Beaver reporter, David Lea presents a real life story about how someone has slipped into poverty. The interviews also highlight the challenging of navigating the system to get assistance. Part Three in te Metroland's four series of Living in Poverty reports has been identified that it will be: Uncovering the Hidden Poor discusses the obstacles faced by those living in poverty. We encourage you to discuss this with friends, co-workers and relatives to see whether they ave read it and their perception of these issues in Halton. Only in this way can we stimulate change.
Posted by John Gregory at 8:54 AM No comments:

A person living in poverty is not somebody different. It’s not someone who deserves to live in poverty. It’s just somebody the same as you or I who had a series of problems and didn’t have the supports we have and that’s how they end up in poverty.

Living in Poverty - A Special Report

In last week's Milton Canadian Champion is an article about the impacts of poverty in our affluent community. It is the first of a series of four special reports in to Living in Poverty in Halton. It discusses the findings of the Halton Poverty Roundtable and Halton Region report. Discovering the Hidden Poor in Halton is a four-part Metroland series examining the complex issue of poverty in the affluent region’s communities. The series examines those who find themselves struggling to survive and who face deprivation, exclusion and isolation as a result. The series looks at poverty’s multiple dimensions, those who deal with it on a daily basis, contributing factors and barriers, possible solutions and resources that can offer assistance. I commend the Champion for this important special series. The 2nd in the Living in Poverty series will be: When Poverty Hits Home will share the stories of those who are living in poverty in Halton. It is great to see the increase in the commentary and evidence being discussed in recent years.
Posted by John Gregory at 7:20 PM No comments:

Milton Transitional Housing is accepting applications for a new part-time contract position of "Administration Manager". Please check out the details on the Milton Transitional Housing website and pass this information along to anyone you know who might be interested in applying. Applicational deadline is April 15. This is an important role in further helping the organisation move forward towards achieving its goal of seven units by 2016.
Posted by John Gregory at 10:28 AM No comments:

Garth Brown, landlord and affordable housing advocate will be speaking about his projects in Kitchener, Oakville and Burlington at Southide Community Church on Monday April 15th at 7pm. This regular bi-monthly gathering is a time to learn the latest progress from Milton Transitional Housing concerning the housing crisis in Milton and Halton, as well as get to know each other. If you are interested in hearing more about what we are doing, or getting more deeply involved as a volunteer, please join us on Monday, April 15 at 7pm at Southside Community Church, 7480 Derry Road (south side between the Sports Centre and the hospital).
Posted by John Gregory at 10:12 AM No comments:

The original twitter profile @HSHMilton is going offline very soon and we recommend you now follow @MiltonTH1 on twitter where you will find the same interesting content on those at risk of homelessness in our community and wider a field. At the start of the original project we had been granted use of the Home Suite Hope name as we were being mentored by Home Suite Hope Shared Living Corp in Oakville. Milton Transitional Housing Corp. is now as standalone project, with its own website, Facebook page and twitter profile. You can connect to each of them here. This blog will also continue. It has received almost 20,000 page views and daily visitors. This blog details our story since 2008. Our quest to establish 7 units to help those at risk of homelessness in our Milton community is on track and remains our vision.
Posted by John Gregory at 7:15 AM No comments: 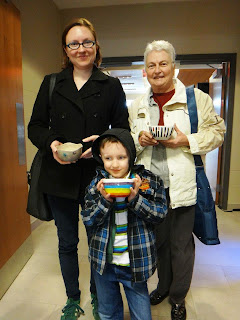